On December 13th, 14th and 15th, we organized the 3rd CompMusic workshop together with several other events at IIT-Madras (Chennai, India), all of them related to the work we are doing on Carnatic and Hindustani music. On the 13th we organized a research workshop to present current research results, on the 14th we organized a special seminar aimed to the general public and dedicated to the tools we are developing for the exploration and appreciation of Carnatic music, and on December 15th there was a lecture demonstration by the mridangam virtuoso Dr. Umayalpuram K Sivaraman. The slides and video recordings of most of the presentations are available online. 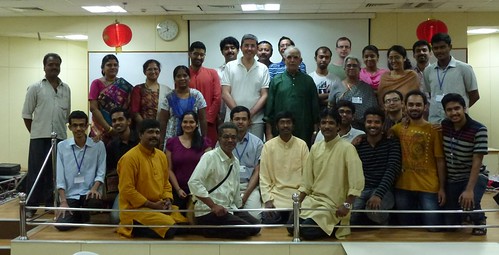 On the workshop of the 13th we went over most of the work done by the CompMusic groups working on Indian music, thus by MTG-UPF, IIT-Bombay and IIT-Madras. It included 14 presentations summarizing the work of the more than 20 researchers working within CompMusic on Hindustani and Carnatic music.

The ComMusic project has reached its midpoint, 2.5 years out of the 5 years that will last. In the first talk of the workshop I gave an overview on what has been accomplished so far. My opinion is that there has been very good progress, specially considering that before the project started, very little research had been done on the computational analysis of the music traditions we wanted to work on. At this time the research problems to work on have been well defined, we have put together very useful research corpora, we have defined the methodologies that we will be using, and finally we have an evaluation framework with which to test most of the research results being generated. On other presentations P. Rao gave an overview on the research carried out at IIT-Bombay on Hindustani music and H. Murthy gave another overview on the research carried out at IIT-Madras on Carnatic music.

The research topic in which we are putting the most efforts is melodic analysis. Five presentations focused on that. S. Gulati’s presentation introduced his PhD thesis which focuses on a semi-supervised methodology for melodic motif discovery, first reviewing the results obtained on tonic identification, then proposing a representation for melody and finally presenting some initial results on Nyas identification. V. Pandit made a presentation of the work done together with J. Ross and K. Ganguli on identifying characteristic phrases (pakad) in Hindustani music by using DTW and K-means clustering. The talk by A. Vidwans and P. Verma focused on using melodic features to distinguish Hindustani, Carnatic and Turkish music. S. Dutta’s presentation was dedicated to his work on motif spotting in alapana’s of Carnatic music based on the idea of saddle points and a version of the Longest Common Subsequence method. The last talk on melodic analysis was given by R. Rajan and this was an approach to pitch analysis by using a modified version of group delay.

On the topic of rhythm analysis there were two talks. A. Srinivasamurthy made a presentation on his current PhD results, which included his research on tracking the akshara pulse and the sama of the tala cycle. The talk by T. P. Vinutha presented her work on structural segmentation in Hindustani music by identifying tabla strokes and rhythm patterns.

The most recent topic that we have started to work on is the one on semantic analysis based on ontologies and text processing. G. Koduri gave a talk on his recent PhD work which is focused on developing knowledge representations for Carnatic music and in which he has proposed an ontology for raga. The talk by J. Ch. Ross also discussed his PhD thesis work which deals with information extraction from online text-based sources using NLP methodologies.

The talk by P. Sarala explored the use of cent filter-banks for various tasks to analyze Carnatic music, including segmentation, motif recognition, and mridangam stroke recognition. The talk by A. Porter was dedicated to the architecture and technologies behind Dunya, the web-based software application that we are developing to interact with audio music collections and to evaluate the technologies resulting from our research.

Given that after 2.5 years of research we already have some initial results that can be of practical use for music enthusiasts we dediced to organize a seminar on the next day, Dec. 14th, to focus on this more practical results. This seminar was aimed to the general public and in it we gave presentations and organized discussions around the computational tools we are developing in CompMusic and that are aimed to explore and appreciate Carnatic music. In the morning I started with an introductory talk to CompMusic, presenting the engineering approaches that are being used to make sense of music data and the tools with which to explore audio music collections. This was followed by a demonstration of Dunya, given by A. Porter and V. Ishwar, in which they went through some of the functionalities of the current prototype version of the software. This was the first time that Dunya (http://dunya.compmusic.upf.edu) was publicly presented. The next 3 presentations went into some details over the three types of tools that this first version of Dunya includes and that are being developed in CompMusic. S. Gulati presented the tools for melodic exploration, A. Srinivasamurthy presented the tools for rhythm analysis, and finally G. Koduri presented the tools for knowledge-driven music browsing.

On the afternoon of the 14th we organized two panel sessions in which several invited musicians and experts discussed about Dunya and about the relevance of this type of technologies for music appreciation. The first panel included very senior and respected musicologists and musicians: S. Rao, N. Ramanathan, A. Prakash and S. Parasuram. The second panel included younger experts and musicians: S. Gopalan, V. Ramnarayan, R. Raja, T. K. P. Kumar, and S. Sankaran. From the discussions it became clear the potential that these technologies have for music practitioners and music lovers, but at the same time the difficulty of establishing a fluid communication between researchers and practitioners, given the diverse interests, points of view and backgrounds.

To finish the public events, on December 15th we organized a special lecture demonstration by Dr. Umayalpuram K Sivaraman, which included an espectacular demonstration of the virtuosism of this legend of the mridangam. The research collaboration that we have with this great musician is a great asset for CompMusic.

Overall, the three days in Chennai were very succesful. It was a great way to gather all the researchers working in CompMusic on Indian music. There are a lot of good collaborations between the different researchers and this event facilitated them even more. It was also very good the attendance we had of people from outside the project and I appreciated very much all their constructive feedback. In CompMusic we want to develop technologies that can be of use to music lovers and this event was a great way to interact with the real beneficiaries of our work, at least for the case of Carnatic music.